Although many Americans support Apple’s decision not to help the FBI and Justice Department unlock the iPhone of the murderer and alleged terrorist from the December 2015 San Bernardino mass shooting, the majority disagree and say that Apple should unlock the iPhone.2 And while Apple has received some public support1 most elected officials – including President Barack Obama and the leading candidates for the Republican presidential nomination – seem to have sided with the Justice Department.

With the political tide turned against Apple, future product decisions might be made in courtrooms and the floors of legislatures and not Jony Ive’s famed white room. The threat of politically-imposed constraints for Apple and Apple’s customers might stem from the company’s own past decisions on how to explain their products to consumers, and encryption technology to elected officials and bureaucrats. In particular, while Apple may have mastered issues of fabrication and global markets, but the political process poses a different set of challenges which by certain measures they could be considered to have been paying too little attention.

As detailed below, Apple has a political footprint which is less than a fourth the size of Google’s. In fact, Apple stands out from most large U.S. companies by not even organizing their own PAC (political action committee).

If lack of political activity has stunted Apple’s relationships with key government officials, the most troubling result of the unlocking debate might be in the longterm prospects for policy change. The current battle over encryption and “backdoors” is not likely to be resolved with a favorable ruling for Apple in judicial proceedings. Senators such as Tom Cotton (AR-R) are already calling for legislation which would empower the government to decrypt. Entrenched opinions against Apple are also shared by the leaders of the U.S. Senate Select Committee on Intelligence.

These opinions may arise from conflicting understandings and assumptions about technology rather than ideological beliefs.

Apple CEO Tim Cook argues: “Building a version of iOS that bypasses security in this way would undeniably create a backdoor. And while the government may argue that its use would be limited to this case, there is no way to guarantee such control.” And security experts like Bruce Schneier agree, “Make no mistake; this is what a backdoor looks like. This is an existing vulnerability in iPhone security that could be exploited by anyone.”

In particular, Apple’s view that unlocking this one phone is tantamount to creating a backdoor for all iPhones is not widely held.

I think Apple has a serious argument that they should not be forced to put a backdoor in every cell phone everyone has. That creates a real security exposure for hackers, cyber criminals to break into our cell phones. So, I think Apple has the right side on the global don’t make us do this to every iPhone on the market. But, I think law enforcement has the better argument. This concerns the phone of one of the San Bernardino hackers, and for law enforcement to get a judicial search order, that’s consistent with the Fourth Amendment. That’s how the bill of rights operates.

Similarly, but on the other side of the political spectrum, Hillary Clinton imagines a robust technical solution which would let only law enforcement unlock iPhones:

I would hope that, given the extraordinary capacities that the tech community has and the legitimate needs and questions from law enforcement, that there could be a Manhattan-like project, something that would bring the government and the tech communities together to see they’re not adversaries, they’ve got to be partners.

It doesn’t do anybody any good if terrorists can move toward encrypted communication that no law enforcement agency can break into before or after. There must be some way. I don’t know enough about the technology … to be able to say what it is, but I have a lot of confidence in our tech experts.

The disturbing imagery of the Manhattan Project aside, politicians’ faith in an implausible tool which would be able to unlock this one phone or just phones which the FBI really, really deserves to be able to open are probably a result of good usability design decisions made by Apple (as well as Google’s Android operating system and others) which safely conceal the complexity of data privacy behind a friendly veneer of techno-magic.3 Our leaders don’t understand that digital security requires both computer science engineering and social engineering in order to be upheld. Giving access away to authorities might very well lead to giving access away to everyone. There are no technical wizards who will be able to solve this problem for them.

But while the choice to hide complicated details of encryption from users might be understandable or even the best practice, Apple (and other tech companies) has a responsibility to explain their position on technical matters to legislators and bureaucrats. When politicians retain novice user sensibilities regarding encryption and other issues, at least some of the blame lies at the feet of large tech companies who by now should be sophisticated enough with respect to the policy process to promote their message via lobbying.

With some mix of the technology relatively youthful companies or just California techno-libertarianism, the tech sector has previously earned a reputation for not fully embracing the gritty reality of the political process, such as lobbying as much as other industries. However, their recent increases of effort have attracted attention, but Apple appears to be underperforming when compared to both other large U.S. companies and its tech brethren.

To understand Apple’s efforts at persuading legislators of various issues, I compiled a measure of political footprint which combines a company’s own federally registered lobbying expenditures from 2015 with the campaign contributions they made during the 2013-14 election cycle from their corporate PAC as well as any employees who made campaign campaign contributions (and listed their employer). This data comes from the Center for Responsive Politics.

In contrast, Apple’s main rival in the market for smartphones, Google, spent $16.7m on lobbying in 2015, gave $1.65m in campaign contributions via its PAC, and another $2.25m via employees during the 2013–14 election cycle for a combined $20.5m political footprint – over four times the size of Apple’s.

Apple’s political footprint is also on the small side when compared to other large companies (as measured by market capitalization on on December 31, 2015 as reported by YCharts).

Of the companies researched worth over $100b, the average political footprint is over twice that of Apple’s at $10.14m – only Visa and Cisco Systems come in with figures lower than Apple’s with footprints of $4.2m and $3.77m, respectively. Politically, Apple throws its weight around like Walt Disney, a company which is no lightweight, but still less than 3 times the size of Apple and not much like what we witness from companies like Google, Exxon Mobile, or AT&T. 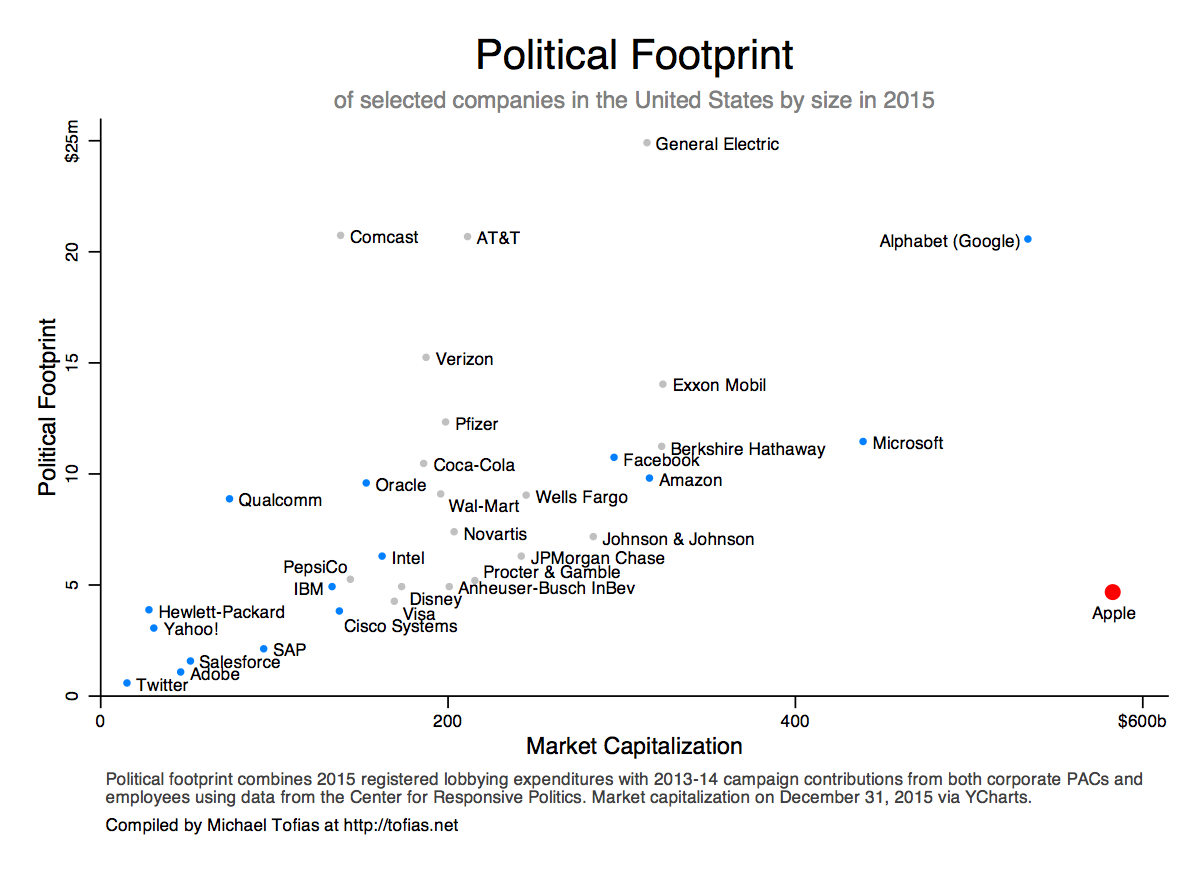 Since it’s well-known, among political scientists at least, that “industries with greater potential benefits from government assistance contribute systematically more [money],”4 and the tech sector has typically faced less regulation and depended on fewer government contracts, I added several other large technology companies to the analysis as a way to create a quick baseline of what we might expect from Apple. I’ve used blue markers to indicate tech companies in the Political Footprint figure. A positive relationship between company size and political footprint is quite visible. Throwing caution to the wind, we can estimate the simplest possible linear regression which would suggest that we might have reasonably have been able to expect that Apple might have a political footprint somewhere in the neighborhood of $17m to $21m which is quite a bit more than the observed amount of $4.61m.

Now this certainly isn’t the most sophisticated analysis and I don’t mean to say that registered federal lobbying and campaign contributions represent all political activity that a company might engage in. For instance, Tony Podesta claims that a vast amount of lobbying goes unreported and due to federalism many companies probably aim efforts sub-nationally. Uber Technologies, which is often considered a political powerhouse, mostly engages in state and local efforts, has recently spent a comparatively small amount on federal lobbying (less than $500,000 in 2015) and campaign contributions (only $20,750 in the 2013–14 election cycle). Apple also belongs to trade associations and industry groups which engage in lobbying activities (e.g., the Consumer Technology Association, Retail Industry Leaders Association, Download Fairness Coalition, etc.). So this is not to say that I’ve captured all of what Apple has been up to inside the Beltway, but the company does seem to have put fewer resources toward politics than we might have expected when comparing them to their peers with respect to size and industry. We might in fact say that when it comes to politics, it’s clear that they “think different.”

Apple Is Punching Below Their Weight

While many might regard choosing to forego campaign contributions and intensive lobbying as virtuous, they’re wrong to dismiss the value of all such political activity. Spending money isn’t about bribing corrupt Washington politicians.5 Persuasion can be difficult, but it might be impossible in the absence of new information. Apple has probably been foregoing fairly affordable (to them at least) opportunities to purchase access to legislators and bureaucratic decision-makers. By purchasing access through campaign contributions and lobbying efforts they’d be purchasing a chance to convey political knowledge and policy information.

Without clear signals from interest groups, politicians are likely to continue turning to law enforcement officials for guidance. Law enforcement officials have a different set of priorities from the computer security experts and users who agree with Apple’s current position on backdoors and iPhone unlocking. Ignorance of the tradeoffs at stake seems like a potential stumbling block rather than impassible ideological dispute.

A large increase of effort won’t necessarily help change the current framing of encryption away from issues of national security, terrorism, and concern over child pornography let alone guarantee a desired policy outcome for privacy activists. However, those of us encouraged by Tim Cook’s strong stances for gay rights, environmental policy, and this position against the FBI and DoJ should probably hope that Apple is also responds with an increase in lobbying and campaign contributions commensurate with their corporate size. “At a minimum it makes it more difficult for politicians to criticize you when they have taken money from you,” says political scientist Michael Ensley.6 And for the foreseeable future, it looks like Apple needs all the help they can get not getting criticized by policy makers as they press the case for their users’ privacy and security.

DATA the data used in this analysis has been made available for download as a CSV file. It was collected by the author from the Center for Responsive Politics and YCharts.

View the most recent posts in blog, all of the posts in the archive, or browse the tags.