I love this woman.

We should be suspicious of $45 billion earmarked to build out this worldview, and we should remember that much of that $45 billion will benefit Zuckerberg’s peers, materially and otherwise. And perhaps we should also wonder whether instead of letting the mega-rich put their estates into “charities” of their own design, and thanking them profusely for it, we wouldn’t be better served by just taking it from their corpses.

The business community in Wisconsin should ask policy-makers to calm the seas around higher education funding, or risk sinking a research ship that helps keep the economy above water.

One of the all time greats.

John Sides on the Pew Research Center report Beyond Distrust: How Americans View Their Government:

There are clear partisan divides on some issues, such as ensuring access to health care. But on other issues there is a substantial bipartisan consensus.

If there is one good generalization about Americans’ attitudes toward government, it is this: Americans hate government, but they like what it does. 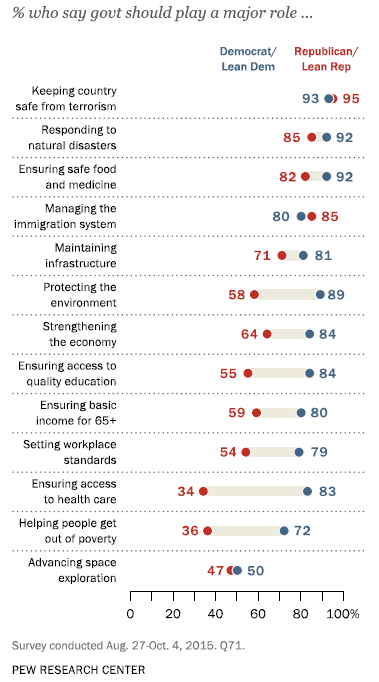 “Keep your government hands off my Medicare,” etc., etc.

Parties recognize that the presidency is an actual job requiring not just intelligence, wisdom, or determination, but political skill. Knowing which agenda items to push for and which to abandon when times get tough; knowing whom to appoint to what positions and whom to avoid; knowing how to work with Congress when possible and fight them when necessary; knowing the tone to take during a war, crisis, or natural disaster; knowing how to work with people you can’t stand and occasionally break with longtime allies; knowing when advisers are being honest with you and when they’re pushing crap — these are actual skills, and they are vital to the job of the presidency. Some people may have more aptitude for them than others, but they all take time and effort to hone, and there’s absolutely no reason to think that a well-published law professor, a wealthy real estate mogul, or a talented surgeon has more of these skills than anyone else does.